Congratulations to family law attorney Jack Emmott for being named in the National Law Journal (NLJ)’s second annual “Divorce, Trusts & Estates Trailblazers” list. Jack was selected from a competitive field of nominees, all of whom have “changed the practice in their respective fields through innovative and exceptional legal strategies.”

I am so blessed to be recognized by the National Law Journal in its May 2017 issue for my work in the practice of collaborative law. There are instances which require resolution of family law disputes within the framework of the adversarial court system; I have litigated hundreds of cases.

But, collaborative law process enables couples to resolve their differences privately, peaceably and on their own timetable and without court intervention. For the sake of their children the co-parenting relationship is preserved and protected. That is the legacy I want to leave in my calling; reconciling a broken world one collaborative matter at a time.”

On July 16, 2016 at the State Bar of Texas Annual Leadership Conference the Texas Access 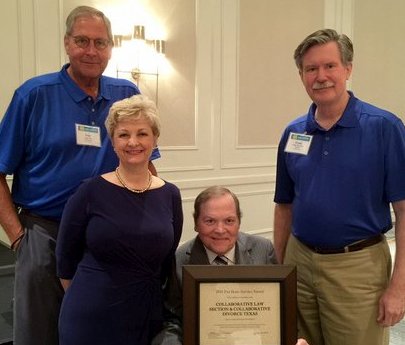 The Collaborative Law Pro Bono Project was created through the joint efforts of Collaborative Divor
ce Texas and Houston collaborative attorney, Norma Trusch, who was instrumental in developing the forms used and in the training of the attorneys who participated in the project; Alissa Gomez, Executive Director of the Houston Volunteer Lawyers who enthusiastically supported this endeavor; and the Collaborative Law Section under Jack’s leadership. Norma was out of town and was unable to attend.

Jack believes that every family should be entitled to a dignified, confidential, client-centered, peaceable divorce resolution process which protects children from the harm done to them in adversarial litigation. The collaborative di
spute resolution process should not be a privilege of the purse. Parents, married couples and their children have serious problems and needs that are not confined to the wealthy, upper social-economic part of our society. One could argue that the poor have an even greater need for such help than do the wealthy. The poor do not have access to the array of highly qualified therapists and mental health care professionals that others do.

Jack says, “ I believe this Project in Texas holds hope for thousands of poor families and their precious children to have legal outcomes which preserve and protect important and sacred relationships; in short to bring about a change that is generational and with an incalculable positive and lasting impact on society for years to come.”